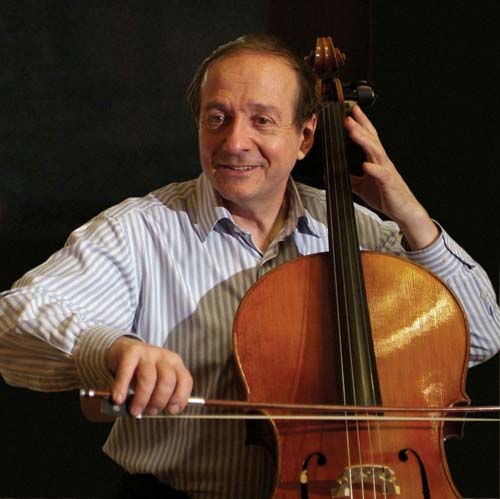 Miklós Perényi is undoubtedly one of the greatest cellists of his generation and in fact of all times. He was born in Budapest in 1948, and it quickly became clear that he was a child prodigy. As early as the age of seven his exceptional talent was recognized and he was admitted onto the Cello Department of the Franz Liszt Academy of Music in Budapest, where he studied with Professor Ede Banda, who himself came from a distinguished family of gypsy musicians. Not only authorities like Professor Banda recognized Perényi’s talent, but Zoltán Kodály was greatly impressed with the young extraordinarily talented child who came to perform in front of the Kodálys at their Budapest home. Without any doubt, the recognition and attention of Zoltán Kodály must have meant much to the child. For his ongoing interest in performing works of the great Hungarian Master, the International Kodály Society is granting Miklós Perényi Honorary Membership.

Perényi also quickly gained international attention, among others from Professor Enrico Mainardi, who was teaching at the renowned Accademia Nazionale di Santa Cecilia in Rome. He invited the young Perényi to come and study with him. He graduated from there in 1962 at the age of 14. One year later, he won the Pablo Casals International Violoncello Competition in Budapest. It resulted in attending master classes with maestro Casals in 1965 and 1966 and in performing at prestigious festivals such as the Marlboro Festival in Vermont, USA. Nowadays, Miklós Perényi is performing on all major podia of the world and, true to his Hungarian soul, Zoltán Kodály’s works for cello occupy a very important place in his concert programs. In 1980 he was appointed Professor at the Liszt Academy of Music (known today as the Liszt University) and he is a master teacher in demand on the international scene.

He has recorded extensively, only a few of which titles can be mentioned here. Among them are the Complete Music for Piano and Violoncello by Ludwig van Beethoven together with pianist András Schiff and all of the major cello concertos. And, of course, the great works of Zoltán Kodály, among them the world-wide acknowledged Sonata for Cello Solo Opus 8 in B minor, which is one of the rare 20th century masterpieces that can be compared with Johann Sebastian Bach’s Suites for solo cello. Beyond performing and teaching, Perényi is composing, in particular works for solo cello and for instrumental ensembles of various sizes. Those who have the pleasure of knowing the now 66-year-old Perényi personally cannot do otherwise than admire his humble and gentle personality, his great virtuosity, and his total and unconditional devotion to bringing the beauty of music to the world.