In its 2014 annual meeting, the Board of the International Kodály Society decided to grant Honorary Membership to
Mr. Péter Erdei. 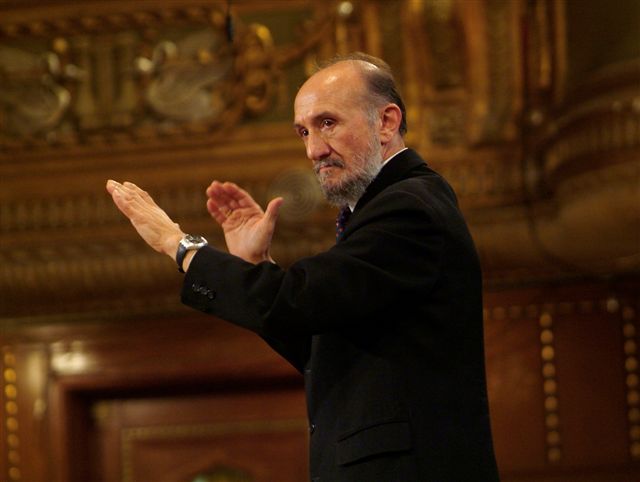 Péter Erdei developed his first musical impressions at home, as his mother was a school music teacher. He also studied piano, music theory and composition in the famous Debrecen Kodály Conservatory (Secondary Music School). In the latter department, his teacher was Zoltán Pongrácz, a former pupil of Zoltán Kodály. Erdei received very important, life-long impressions as a member of the Debrecen Kodály Choir founded and led by György Gulyás, the director of the school. Zoltán Kodály sometimes visited the school, which gave young Péter the opportunity to meet the Master on the occasion of a solfege competition. These deep impressions were enough to inspire him to continue his studies at the Liszt Academy in the department of music pedagogy and choir conducting in order to prepare for both a teaching and a performing career. He began his studies in the 1963-64 academic year.

His talent, knowledge, devotion and diligence earned him a special position among the students even at the beginning of his professional life. I was later able to attend his performances and choral rehearsals in person, and from them, I retrospectively understood how well founded his authority and recognition among his schoolmates was. So, it was not surprising that Professor Erzsébet Szõnyi invited him to join the group of students who took part in a two-week series of demonstration lessons in the music pavilion of the Montreal Expo 1967. This excellence was the basis for an invitation to the USA by Ms Denise Bacon, one of the promoters of the adaptation of the Kodály Concept and founding head of the Kodály Musical Training Institute, who was searching for such a colleague to help in realizing her vision for American music education.

During his American years, Erdei gained a lot of valuable pedagogical and organizational experience, which he afterward put to good use during his career. A tangible result and documentation of the four years he spent there appeared in 150 American Folksongs to Sing, Read and Play, which he compiled and edited in collaboration with Katalin Komlós.

After his return to Hungary in 1972, Erdei first took a teaching position in his native town, Debrecen, where he worked for the Music Teacher’s Training College, but its mother Institute, the Budapest Liszt Academy, also claimed his talent for teaching choir conducting. 1974 became a very important year—a real turning point— in his life when he accepted the invitation of the Ministry of Culture and Mrs. Sarolta Kodály to become the director of the Kecskemét Kodály Institute founded in 1973. In 1975, just two months before the official inauguration of the Kodály Institute, the Second International Kodály Symposium was held in Kecskemét, within which frame50 work the International Kodály Society was founded. The first general assembly’s participants elected Péter Erdei as one of the first vice presidents of the IKS, in which position he served for four years. Since then, he has promoted the special choral projects of the IKS, especially commissions and competitions of new works. He has continuously worked with choirs during his terms as director of the Kodály Institute and as an instructor of choral conducting at the Academy of Music. Maestro Erdei left his mark on the Kecskemét Teachers’ Choir during a long span of years in which they developed and flourished, as well as directing other, professional choirs. He occupied this position at the Hungarian Radio Chorus for two years, and in two longer periods he directed the famous Debrecen Kodály Choir. Professor Erdei was also the conductor of the Liszt Academy Alma Mater Chorus and the founder of the New Liszt Ferenc Chamber Choir. He keeps up to date with contemporary choral art in addition to the standard masterworks. Professor Erdei’s special devotion and talent in preparing and performing Zoltán Kodály’s compositions are evident in his interpretations of Psalmus Hungaricus, Te Deum and Missa Brevis. Under his direction, the Debrecen Kodály Choir recorded two excellent CDs of the complete edition of Kodály’s a cappella works for mixed voices on the Hungaroton label. He has also appeared internationally. He has become one of the most influential educators of new generations of choir conductors at the Liszt Academy, the Kodály Institute and in masterclasses.

Those who have worked with him in the Kodály Institute or in other coursework have experienced Péter Erdei’s expedience and demanding personality, which he first asserts on himself. This also characterizes his musical activities. I think the title of an interview with Professor Erdei in the 1980s summarised his human, artistic and ethical attitude very well. The reporter found him “an incorruptible person of music”. This personality trait of his sometimes makes his path difficult, but without his resolution, determination and strong belief in Kodály’s ideas, he could not have led the Institute in such a good and successful way through so many difficulties, and fulfilled the many tasks he assigned to himself. Now, at age 70, he actively and tirelessly teaches his students at the Liszt Academy Kodály Institute.

Professor Erdei’s talented, devoted and successful work has been recognized by local and state awards like the Katona József Prize of Kecskemét, the Liszt Prize, the Bartók-Pásztory Prize and the title of Merited Artist of Hungary, he has been awarded Honorary Doctorate of Capital University (Columbus, Ohio, USA), and he is an honorary member of the Hungarian Kodály Society as well. The leading principles of his life and work in the spirit of Zoltán Kodály are to serve the great art of music, and through it, to serve people and humanity, something we very much need in our changing times.