Lajos Bárdos was born 115 years ago

On 14th October, 2014 a festive concert is held from the composition of Lajos Bárdos, commemorating the 115th anniversary of his birth.

Bárdos was a composer, and an outstanding Professor at the Liszt Academy for 40 years, he was awarded the Kossuth Prize and the Merited Artist Prize. He considered the activity of choir conductors to be the highest level of musical expression. Using his oevre as a composer and his organizational skills, he managed to realize, through the “Magyar Kórus” Publishing House, that the composed choir pieces became nationalwide known and available. The first Singing Youth concert was held in Budapest in 1934, to be continued as a living tradition until these days.

During the course of his life Lajos Bárdos did a lot to enhance musical life in Hungary and to develop the Hungarian choir movement. Posterity remembers him by schools, choirs adopting his name, societies being formed, paying tribute to his memory and keeping alive his compositions.

The jubilee concert wishes to exemplify the words of Bárdos:
“Singing makes our lives more beautiful” 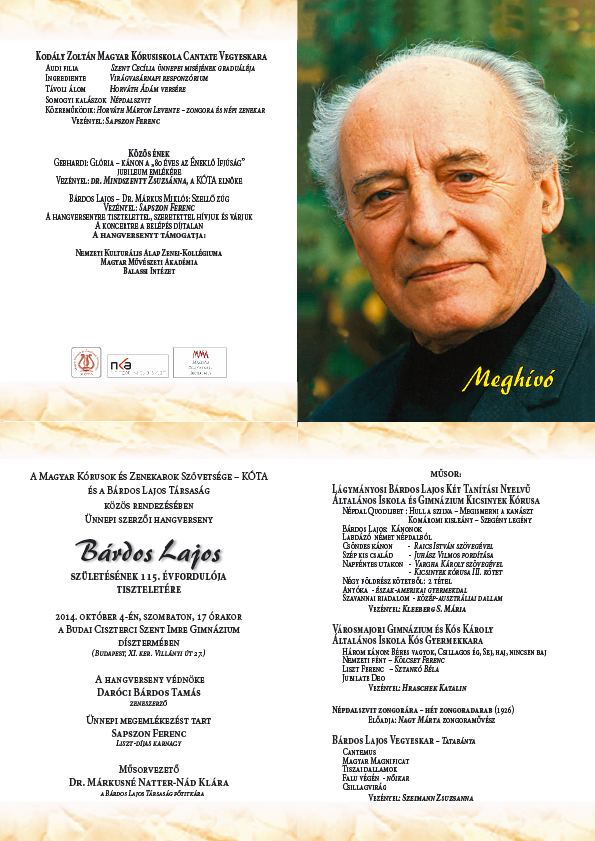