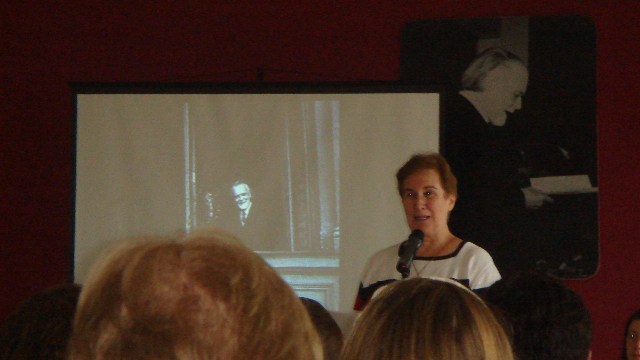 In 1946, Kodály wrote about his own early childhood musical experience. He recalled (and I quote from the Visszatekintés):

„It was sunset on a summer day. The room was filled with the reddish gold of the evening glow. My parents were playing music. I was some three or four years old, and I was lying on the floor at the leg of the piano. It was then that I received my first and ever deepest musical impression. Later on, I learnt that the piece was the F – Major violin sonata of Mozart. I do not believe that I could have become the musician I am now, or rather, that I would not have become a musician at all, if on that day my parents had played a popular song-hit.”

He further wrote, „The bad taste of adults can hardly be improved. On the other hand, good taste developed early is difficult to spoil later on. Therefore, we should be very careful with the initial impressions. They affect the whole life.”

Katalin Forrai, or Kati – as many of us knew her --, devoted her entire professional life to the realization of Kodály’s strong belief: that high quality musical education of young children (and their parents), is the foundation for a wholesome and aesthetically rich adulthood.

Kati, if you will allow me to use her familiar name, was born in 1926, into a musical family. Her father was a professional musician, and her older brother, Miklós, became a famous professor at the Franz Liszt Music Academy. Kati had earned two diplomas, one as a primary school teacher from Debrecen College as well as a diploma as a music teacher, when she approached Kodály to tell him that she wanted to focus her musical career on young children.

In her own words, and with her marvelous sense of humor, she related the story of that all-important visit to Kodály’s home. She wrote,

„I had the manuscript of an illustrated tale about SO- MI dwarfs under my arm. I intended to go into the music education of the very young, so I asked the master for advice at the start. After having turned over the pages of the tiny book, he broke the awkward silence by saying, „It’s trash. Children mustn’t be misled. A tale should be a real tale and the melody is to be sung and not spoken.”

On having stuttered out my plan about the music education of young children, he advised me to acquire at least two additional diplomas, if indeed I wanted to take on that immense responsibility. He told me that I must try out in practice all that I acquired as theoretical knowledge.”

It was Kodály’s first wife, Emma, who initially acknowledged Kati’s potential as an international figure. She told her that she had a charismatic personality and that she should study languages and be very precise in her work. In her own words, Kati tells the story:

„Due to a fractured femur, Emma Néni had to stay in the hospital for years. To share her involuntary confinement, Kodály moved into the hospital. During the day, when Kodály had to perform his duties outside the hospital, friends, relatives, and students took turns spending the afternoons with her – listening to her stories. On Wednesdays, his sister-in-law, Mrs. Sándor, and I were on duty.” This is where and when Emma told Kati to prepare herself for an international career, as well as her all-important career at home in Hungary.

Kati always emphasized to her students the importance of staying in practice – of always teaching children as well as doing research and teacher-training. This was exemplified today with the awards presented to Naomi Chinen and Christiane Pineau, each a magnificent teacher as well as a national figure in early childhood music education.

Kati’s international career was secondary to her first priority – the musical education of Hungarian pre-school children.

It would be impossible to relate in this short speech ALL of Kati’s contributions to the field of early childhood music education. However, it is very important here to state that before Katalin Forrai, there was no established field of early childhood music. There were a number of published song books intended for young children to sing, usually with piano accompaniment. But, almost without exception, these songs were of wide ambitus and far too difficult for young children to sing themselves. It was Katalin Forrai who established the Early Childhood Commission of the International Society for Music Education. This was the first international platform for the exchange of ideas and information about young children’s music education that was developmentally appropriate. This was new: early childhood music education based upon research and understanding of the universal musical development of the young child. Kati’s work through ISME set the example, the gold-standard, for the world. In fact, Kati was the first and only early childhood specialist to become President of ISME.

I want to tell you another story, which Kati told me about the selection of high-quality music for young children to sing. Of course, the basis of everything was singing, and the development of musical understanding and skills was based upon the children’s own personal experiences with high-quality music. Kodály had suggested to Kati that she begin her search for songs and singing games with the collection, Children’s Games (Gyermek Játékok), a collection of 1,161 songs and singing games of Hungarian folk heritage, published by the Hungarian Academy of Sciences. (show book). She began by eliminating songs with wide range or ambitus, and games that were far too difficult for young children to play. She took her first list to Kodály, and HE eliminated those which were not the most typical of Hungarian style or tradition. The process went on for several years, both Kodály and Kati eliminating songs for various reasons which were inappropriate, and together they established the new criteria for songs and singing games for young children. Finally, the list of 1,161 songs and games was whittled down to about 4O songs, at which Kodály smilled and said that indeed, there was a need for him to compose some „songs for little people”, the „Kis Emberek Dalai”.

Not only the songs were important, but the texts also should be of highest quality. Kodály sent a young Katalin Forrai to knock on the door of the famous Hungarian poet, Sándor Vöeres, to ask him to write texts for some of Kodály’s melodies. She was very inhibited to do it, but she did as Kodály asked, not knowing that Kodály had already called him and asked him to do it. Kodály wanted Kati to be brave enough to ask him. It was a lesson well-learned.

Whenever Kati traveled abroad to teach – whether it was Japan, Canada, Finland, Australia, The United States, everywhere she went, she spent many hours learning the authentic folk songs and rhymes of each country -- and in each country’s primary language. She studied the linguistic and melodic turns of the children’s music of each culture, demanding the highest standards of her students wherever she went. She insisted that each nation must discover its own most beautiful musical heritage to teach the youngest children. In turn, she also learned to sing them herself.

Kati’s large collection of international songs and her private papers have been generously donated by Kati’s family to the Kodály Institute here in Kecskemét. In fact, scholars are now coming here to study her life’s work. I suggest that you make a visit to the Archive Library, while you are here, to take a look at Kati’s extensive collection of children’s songs from around the world.

The demonstrations you have seen today, the summer courses for Hungarians and for foreigners, the work of Naomi and Christiane, and all the other marvelous nominees for the award, all exemplify Kati’s principles for excellence in early childhood music. The handout for this session is a summary of Kati’s most important principles. May they stimulate thought and self-assessment for your own teaching.