A talk given by Mary Skone-Roberts at the Opening Ceremony
of the International Kodály Symposium in Kecskemét on 29th July, 2013. 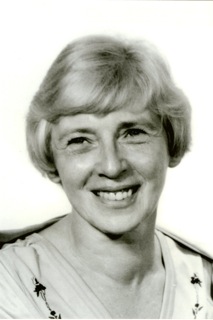 Firstly, I would like to express my gratitude to Dr Nemes for giving Cecilia Vajda’s work the recognition it deserves by deciding to house it, here, in the archive at the Kodály Institute. An important lady in the scheme of things -one of the first generation of pioneers who took Kodály’s teachings directly from him and spread them world wide.

It is a great pleasure to be invited to speak to you about Prof. Vajda, Cecilia, and to be able to pay a final tribute to the person who became my dearest friend. For over 30 years she was a significant influence in my life, as she was in the lives of countless teachers and musicians throughout Great Britain. A remarkable person whose strength of personality was tangible and rare to find. She possessed outstanding knowledge in the field of music education and choral music - a very clever lady - but one totally without pretension with a liking for simplicity. During those 30 years, I witnessed Cecilia dedicate her whole being to the promotion of Kodály’s philosophy of music education in Britain and in so doing, she changed the lives of all she taught, as well as the landscape of British Music Education. Quite a feat for one lady, but with her determination, tenacity and bravery to overcome all odds, together with the brilliance of the Kodály Principles, Britain did not have a chance!

Undoubtedly, she left a lasting impression on all those she taught and this was never more evident than when I asked Nigel Kennedy - whom she had taught 40 years previously at the Menuhin School when he was 8 - if he remembered Cecilia Vajda. He immediately smiled and said -“Of course I do! She was a wonderful teacher. Her style of teaching was unique and inspirational. I loved her lessons - they were the highlight of the week!”

I got the same reaction from Stephen Hough, the concert pianist, whom she taught at Chetham’s when he was 11 years old, and he later wrote - “I have the clearest memory of Cecilia Vajda - a woman of immense, infectious vivacity and as sparkling as a perfectly polished silver knife”. He went on -“An apt analogy, I think, because the clarity of her teaching and her ability to dissect musical ideas was as sharp as that knife. I remember her flashing laughter, her intense eyes and above all, her passion for music and the teaching of it.” Obviously, a very perceptive little boy as he seems to have encapsulated Cecilia in just a few words.

It was 1973 when I met Cecilia. I was nearly 30 then and teaching Physics at the time, but decided to escape and enjoy a year of music at the Royal Welsh College of Music and Drama. She had just arrived at the College to take up her appointment as Senior Lecturer, but within a month of beginning her teaching there, unhappily for Cecilia, she broke her heel. As my career did not depend upon my music studies and I was the one with the car, I was able to be of assistance to her -as she had a very large cast on her leg and was told by the specialist that it was imperative that she should not put weight on her heel for many months. Needless to say, Cecilia paid little attention to that and so I became ‘principal chauffeuse’! And so our friendship began with music very much at the centre. Apart from Kodály, Cecilia also introduced me to the world of opera and since her love and knowledge of opera were prodigious, I could not have had a better guide -and Covent Garden became my second home as well as hers!

A year later, I returned to my world of teaching Physics and for the next 7 years I watched and marvelled from afar as Cecilia worked day and night to further Kodály’s ideas. In addition to her full time job, in the evenings she ran Kodály Courses for the Teachers’ Centre in Cardiff and would then commute back to London on Friday afternoons to give weekend Lectures, as well as Courses which usually began only a few hours after her train pulled in to Paddington Station! Sometimes, too, she managed to rearrange her teaching at the College, so enabling her to undertake requests for 3 and 4 day Courses around the country. Add to this, the articles for Music Magazines which flowed from her trusty typewriter on a weekly basis, as well as the letters to journals, usually to defend misconceptions written about Kodály’s ideas - and I think you get the picture of one amazing lady.

In 1981 when Cecilia founded the British Kodály Society - as it was then - she asked if I would help with the administration of the Society in my spare time. As I had become a complete convert to the value of the Kodály Principles during my studies with Cecilia, I was happy and privileged to assist her and do what I could to help the cause. So for the next 25 years, I was able to witness, at first hand, as Cecilia dedicated her whole existence to furthering and preserving the Kodály Concept in Britain in its purest form so enabling her students to become better musicians.

Cecilia pursued excellence rigorously - as a choral conductor and as a teacher - and would work with students until they achieved far beyond their own expectations. It was so important to her to equip each student with the skills which would enable them to access and appreciate music of great value - be it through performing or listening. Music was sheer joy to Cecilia and she so much wanted her students to experience that joy.

So from 1981, as well as all of the above, Cecilia added the annual Summer School; the organisation, on a regular basis, of demonstrations of Kodály work by children of different ages; the writing of her 2nd book; as well as the production of support material in the form of videos and cassette tapes - in an effort to bring ‘Kodály’ to the attention of the, as yet, unconverted - and also to provide useful material for the support of musicians and Kodály educators. As she finished one project, she would begin planning the next. Tireless in her efforts -her energy in this regard was boundless - her focus unrelenting -her enthusiasm compelling. Working with Cecilia was, simply, an inspiration -and very exhausting!! Kodály could not have had a more single minded and dedicated champion.

What little time Cecilia gave to relaxation, she loved to go to Regents Park which was only a few minutes walk from her flat. As well as enjoying the peace and the flowers, she just loved to feed the very tame squirrels! Her delight as they took the peanuts from her fingers and often held her fingers with their little hands - always brought a beaming smile - her day was made! As I said, she relished the simple things in life. For further respite, Cecilia would turn -of course -to music! And it was opera which brought her the greatest solace, be it at Covent Garden, the English National Opera, Bayreuth when funds allowed, or via her constant companion - BBC Radio 3 - which each week broadcast live opera performances from all over the world.

As a person, Cecilia was kindness itself, her nature was generous and her warmth of personality, self evident. Her integrity, candor and honesty were so refreshing -you knew precisely where you were with Cecilia! She loved to laugh and had an impish sense of humour, but beware anyone who tried to damage the Kodály cause in any way. She was a formidable adversary who would stand her ground and fight for what she knew to be right.

Cecilia was in and out of hospital for the last 2 years of her life and completely bed ridden for the last 6 months. She bore it all placidly and with good humour and never lost that big smile of hers when greeting visitors. Music never left her. When I was with her, with little prompting from me, she would sing her favourite Hungarian Folksongs, much to the delight of the other patients and Nursing Staff. When I told the Nurses that she had been a choral conductor, they inevitably began to wave their arms around which did not satisfy Cecilia of course, so lessons in the correct way to conduct 3/4 and 4/4 ensued! In fact, when I arrived on the ward, I often found the nurses perfecting their conducting skills with her!! The Nurses were delighted with their new found ability and Cecilia’s beaming smile said it all. Teacher to the end!

I am very happy to be able to announce tonight that in recognition of Cecilia’s contribution to British Music Education, London has decided to erect a plaque on the building where she lived for 40 years. They will be adding her name to a short list of eminent recipients and she would be more than delighted to know that Benjamin Britten -whose works she admired tremendously - is amongst them.

Undoubtedly Cecilia changed and enriched my life. She was a remarkable lady - a very special human being. I am proud to know that she considered me her dearest friend -I do not need any better testimonial. Cecilia did so much to enrich the Kodály movement worldwide - Britain, Japan, Hong Kong - the list goes on. I believe that we all owe her a deep debt of gratitude for the contribution she made to furthering the cause which we all hold dear to our hearts.

Finally, a talk about Cecilia would not be complete without music. There are, of course, countless recordings of Cecilia’s work as a conductor with various great choirs, but I have chosen a more intimate setting. This is a track from an LP (now CD) which Cecilia made with a group of her students from the RWCMD that she named the ‘Ensemble of Soloists’ and titled “A Tribute to Bartók from Wales”. It was brought out by Cecilia in 1981 - to commemorate Bartók’s Centenary Year and also in an endeavour to popularize his marvellous Partsongs which sadly, at that time were little known in Britain. To that end, the Partsongs are sung in English translation.

So I leave you with what I would like to call, on this occasion, “Cecilia’s Farewell”. I am sure that Bartók would not mind! Her message is in the words.