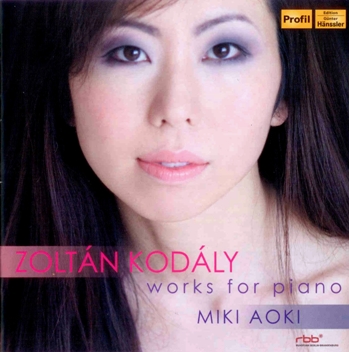 Having signed an exclusive contract with the label Profil Edition Günter Hänssler Miki Aoki has recorded a debut CD of piano works by Zoltán Kodály. Aoki studied at Indiana University with György Sebök, who was taught by Kodály, giving her the opportunity to explore Kodály’s works and to learn the language of Hungarian music.

The recently released CD features works such as the Dances of Marosszék, the Children’s Dances, the Nine pieces for piano op.3, the Dances from Galánta, and the Méditation sur un motif de Claude Debussy and the Valsette, all of which show Kodály‘s development of composition for piano from the beginning in 1909 to 1930.

Born in Tokyo, Miki Aoki made her orchestral debut at the age of 12 at the Royal Festival Hall, London with the National Symphony Orchestra. Her teachers include Boris Berman and Evgeni Koroliov. Recently, Aoki has appeared at some of Europe’s most distinguished festivals such as the Menuhin Festival in Gstaad, Verbier Festival, International Music Festival Sion and Kammermusikfestival Schloss Elmau. Aoki has performed at many prestigious venues such as St. Martin-in-the-Fields, St. John’s Smith Square, the Purcell Room at the South Bank Centre the Barbican, the Laeiszhalle (Elbphilharmonie) Hamburg, in Salzburg, and has toured in France, Indonesia, Cambodia and Myanmar. Her regular chamber music partners include Pierre Amoyal, Andrey Baranov, the Kuss Quartet and the Ariel Quartet. Future concerto appearances include concerts at the Cowbridge Festival in Wales and a recital with the violinist Andrey Baranov in London at the Red Hedgehog as well as a recital at the Oberländer Piano Festival at Wetzikon in Switzerland.