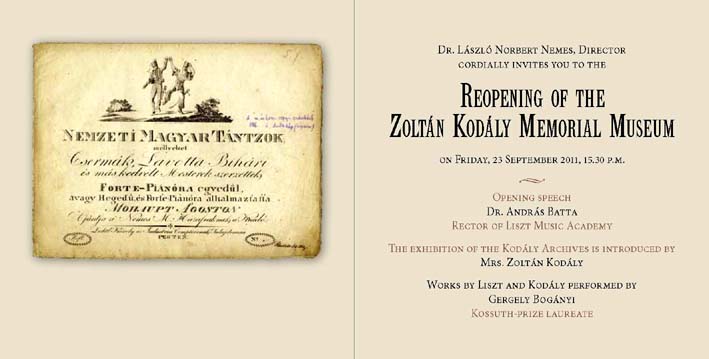 After an unwelcome period of obligatory closure due to the reconstruction of the building, the Zoltán Kodály Memorial Museum was reopened on September 23, 2011.

From October 1924, until his death in March 1967, Zoltán Kodály (1882-1967) lived at the Körönd, today named after him as the Kodály körönd.1 Both the ring road, upon which the windows look out, and the side road with the entrance to the walkup flats shaped like the segment of the ring it occupies, have preserved numerous features of the historical trends that swept across Hungary.
Kodály’s workspace in the flat has basically remained in the same condition in which he left it. The study room with the gigantic library, the music chamber and the dining room equally recall one of the most important 20th-century workshops of Hungarian music history.

The former bedroom on the left of the dining room is used for the temporary exhibitions of the Museum. Now it displays a selection from Kodály’s collection of 19th-century Hungarian scores. The nearly 2000-volume collection of the Kodály Archives comprises almost all Hungarian-related printed music materials of the century, published mostly in Pest-Buda, in some country towns, or, at the beginning of the 19th century, in Vienna. Kodály examined and analyzed the manuscript and printed materials collections of the late 18th- and 19th centuries simultaneously with his folksong collecting activity.

Some of the scores contain verbunkos songs—a Hungarian dance which lent its name to the instrumental music style of the era.2 The genre dates back to the mid-18th century, and was used to recruit soldiers. The biggest part of the collection features the most popular Hungarian dance of the period: the czardas. The czardas genre is a derivative of the verbunkos, the movements of which (slow-fast) occur in a variety of combinations in the czardas. They are usually pieces written for piano, or transcriptions of other instrumental pieces for the piano.

The Museum is open for visitors by appointment only on Wednesday, Thursday and Friday from 10 to 12 and from 14 to 16:30. Appointments may be made by email at This email address is being protected from spambots. You need JavaScript enabled to view it. or by phone at +36-1-3527106. The street address is H-1062 Budapest, Kodály körönd 1.

Endnotes
1 Körönd is the Hungarian word for “circus” or small ring road, meaning that the street name “Kodály körönd” corresponds in usage to the British “Piccadilly Circus.” The Kodály körönd forms an important crossroads on Andrássy Way, a major boulevard in Budapest designated in 2002 as a UNESCO World Heritage Site.
2 Verbunkos is a Hungarian word derived from the German verb werben, “to recruit.”